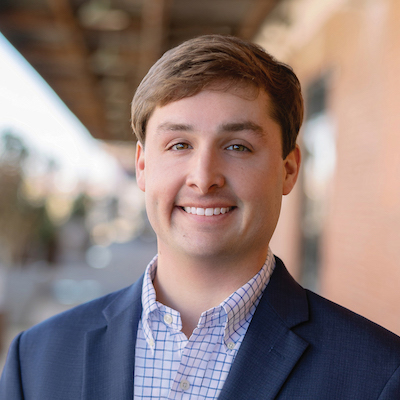 More information about me.

Born in Augusta, GA, but raised in Columbia, SC, Alexander began an early career in real estate while attending A.C. Flora High School, getting his start as an office assistant and runner for Devine Real Estate Group, a local residential firm based in Columbia. He continued his work with Devine while earning his degree in Public Relations from the University of South Carolina. Upon graduating he relocated to the Queen City and began working in sales for Carolina Container, an industry leader for corrugated packaging and supplies.

An avid golfer, and a true Carolinian, Alexander fell in love with Charlotte and the surrounding neighborhoods. He decided to put his passion for real estate and development back into play, and joined Mackey Realty as a provisional broker in 2021. He brings his personal experience in sought-after neighborhoods, such as Plaza Midwood, Southend, and Uptown to those looking to relocate or “try-on” a bigger city, with a small-town feel.

"It's (Charlotte) such a great scene for people in their twenties…and more than enough activities to keep you occupied, between the restaurants, breweries, professional sports teams, while also being a great city to start a career in many different fields."

With a positive, dependable approach, he believes relationship building is key to earning and maintaining his client’s trust when advocating on their behalf, and is thrilled to introduce you to his Queen City. He resides in Biddleville, outside of Uptown Charlotte, and in his spare time you can find him around the lake or beach, or cheering on the Hornets, Panthers, Braves or Gamecocks around Southend.